Fate was finally kind to the city of Memphis and their beloved Beale Street Bears when the lottery gave them the 2nd overall pick in the 2019 NBA draft. Firing head coach JB Bickerstaff and demoting GM Chris Wallace to a scouting role seem to be steps toward establishing a successful brand. Perhaps the franchise will move in the right direction for the first time since Mike Conley was a 4th overall selection. There are good pieces with the existing roster, but also a clear lack of leadership and forward thinking over the past few years in the front office. The Gasol/Valanciunas trade was a very fortunate Hail Mary at the end of this past free agency. It felt like one of those sequences where a guy trips all over the place but lands on his feet. Gasol is playing in the Eastern Conference finals and Memphis received 3 players that were immediate contributors. The signing of Avery Bradley was a great move too. Mike Conley is no longer the co-star that Jaren Jackson needs and none of the moves made in 2018/2019 will make the Grizzlies playoff contenders.

There were several trade rumors towards the end of free agency and those rumors continue to swirl. The second overall pick adds gas to the fire. A Conley trade with Utah is still very much a topic of discussion. I’ve heard rumors of Indiana, Miami, and Boston all being potential suitors, but I want to solidify a core around the NBA All-Rookie first teamer in Jaren Jackson and the 2nd overall pick. I really hope the Grizzlies don’t get cute and take Ja Morant, as several mock drafts are showing. I think it would be monumental in Morant’s development to have Conley around for the first half of the season. However, if the right trade comes along, the front office needs to jump unlike years past. Especially if a deal comes along that could purge them of Chandler Parsons’ grotesque contract. Thankfully there’s only a year left of that whipping post acquisition. I don’t know if I’m ready for a Memphis team without Marc and Mike, but the time has come and there are no likely scenarios where the Grizzlies keep Conley and improve mightily.

Dillon Brooks(23), Ivan Rabb(22), Jevon Carter(23), Bruno Caboclo(23), Chandler Parsons(30), Avery Bradley(28), and C.J. Miles(32) are all on the books through only next season. Parsons will continue to be one of the main talking points. His $25 million contract for next season will be a primary focus of trade negotiations in ’19 and ’20. Rabb looked great at the end of last year and he will be a great part of the frequent bench contributors moving forward. Dillon Brooks has yet to equal his potential and has been plagued by injury. He’s not likely to beat out Avery Bradley for the starting shooting guard position, but wing scorers will be the free agents of choice throughout the next year. Bruno has shown some flashes of promise and would be a good project for the franchise moving forward. Carter has shown to be limited offensively, but a bright kid and a tenacious defender. It’s too early to cut/trade last years second-rounder. I’m okay with parting ways with C.J. Miles after next season. He’s a good player but is holding minutes from a younger players with a higher potentials.

THANK YOU FOR READING AND PLEASE CHECK OUT OUR MOST RECENT PODCAST EPISODES!

Kyle Anderson(25) and Jaren Jackson(19) are contracted through the 2020/2021 season. They should be opening day starters and are crucial to the overall revamp. Jackson was rested towards the end of last season but was the best player on the Grizzlies as a rookie. There are literally no holes in his offensive arsenal and his defense reminds me of a young Kevin Garnett.

Jackson will continue to be the focal point of the franchise and pairing him with an elite young guard like Ja Morant will provide the necessary foundation for a good team. Anderson’s game is unconventional and his nickname “Slo-mo” is well deserved. However, his basketball IQ is off the charts and doesn’t have a real weakness other than speed. His shoulder surgery is a cause for concern, but should be a large contributor barring any health problems or big acquisitions. I hope they hold onto and start Avery Bradley too. His defense fits the Grit-n-Grind model and a well defending guard is crucial to playing the James Harden’s of the NBA. He could be the front court’s veteran presence after the theoretical departure of Conley.

Justin Holiday(30), Delon Wright(27), Joakim Noah(34), and Tyler Dorsey(23) are all players that are out of contract and free agents leading into next season. They were paid a combined over 10 million last year. Point guard was one of the brighter spots and Wright was playing some really good basketball last season, but the drafting of Ja Morant would hint towards a new direction. It would be hard to keep Conley, Morant, and Wright on the same team for long. Ideally they’d retain a proven player in Wright, get a huge piece of the puzzle for Conley, and develop two young guards in Morant and Carter. Those two should be a good tandem for years to come. This all assuming the front office does the right thing and drafts Ja. 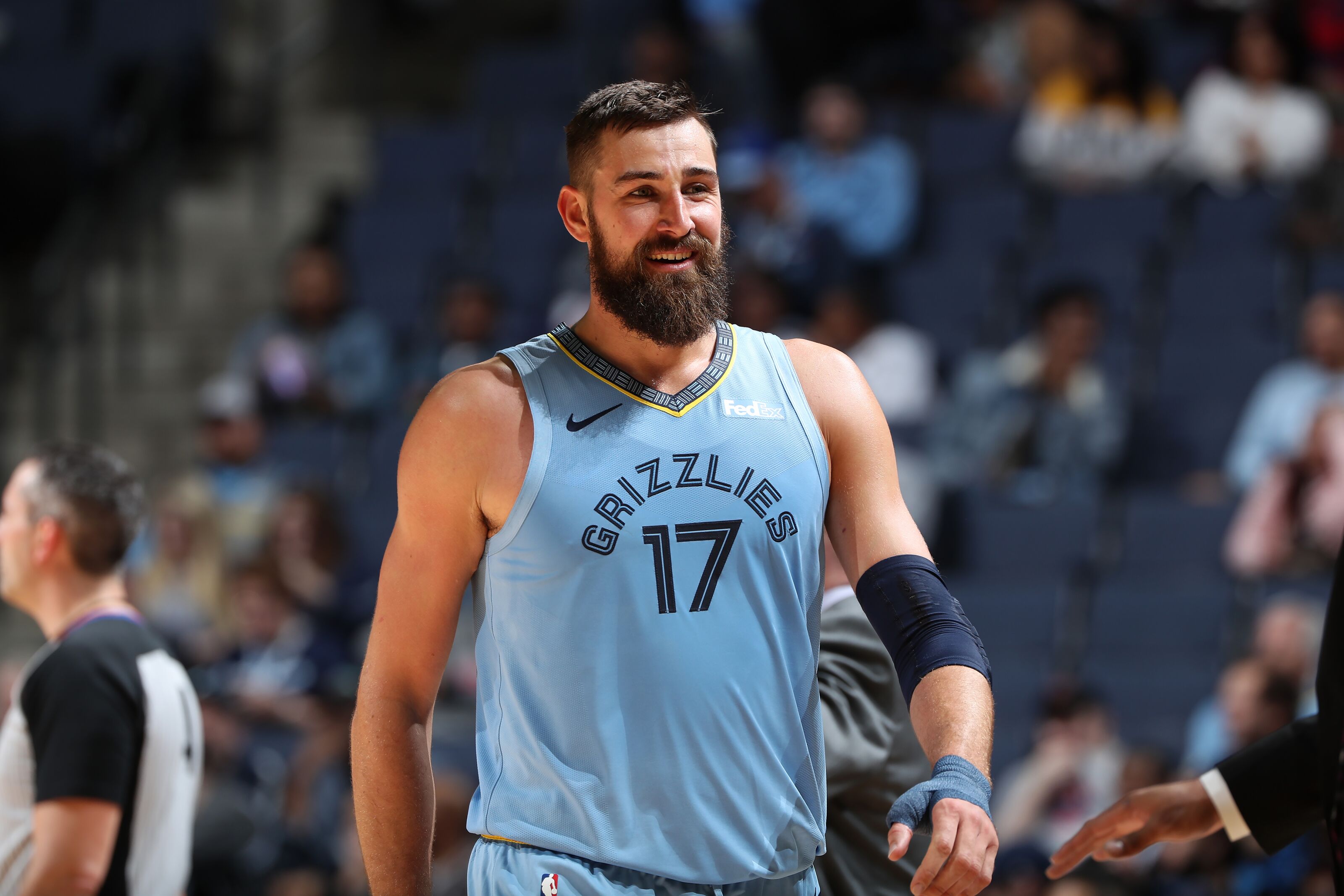 Jonas Valanciunas(27) is the most crucial part of the rebuild to me and a complementary option to any guard on the court. He only played 19 games for the Grizzlies, but averaged 20 points and 11 rebounds during that span. He’s a career 12 and 8 guy, but I am of the camp that his stats will grow with his utilization. He’s been quoted saying that one of the things that draws him to Memphis long term is the larger role he plays. His size allows Jackson to move freely and that should be a pivotal part of any offensive scheme the new coach draws up. A pick and roll or pick and pop offense with Conley/Morant and Jackson should make for a winning combination. Jonas has proven he can shoot longer jumpers as well. His skillset makes him even more valuable as a 2nd option for the big half of these two-man offenses. Valanciunas’ player option comes about on June 13th. That precedes the NBA draft on June 20th and both of those dates will be monumental in shaping the Grizzlies’ next few years. The coaching hire will play a large role in whether or not he re-signs. He’s owed $17.6 Million in 2019 and isn’t likely to better that on the free agent market over the next season. Sarunas Jasikevicius, Alex Jensen, Jarron Collins, Igor Kokoskov, Nate Tibbetts, and Adrian Griffin have all been loosely tied to the coaching vacancy. 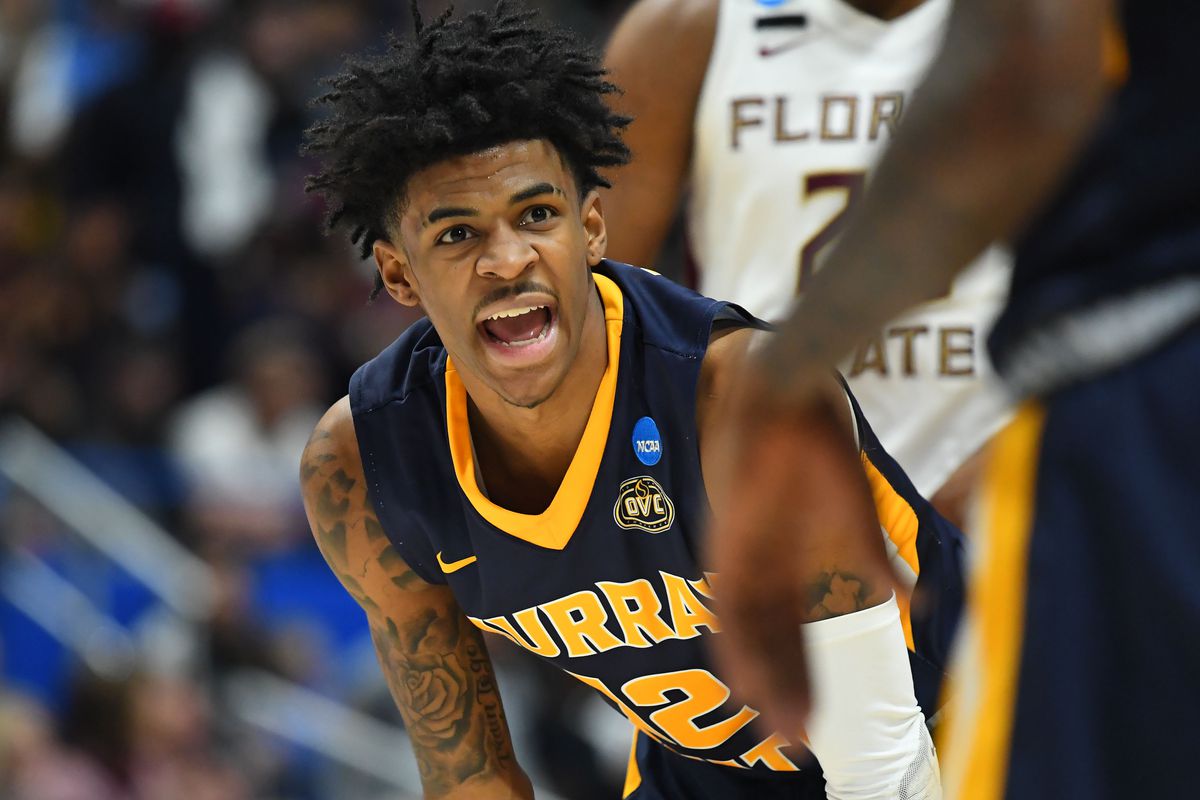 Ja Morant was the best guard in all of college basketball last season. He should put the Grizzlies in a great position to scale the gauntlet of the Western Conference for years to come. I have watched an embarrassing amount of his highlights since lottery night. This Ja Morant guy wasn’t even ranked by 24/7 or ESPN out of high school and his only D1 offer came from South Carolina. The OVC Player of the Year and first team All-American would go on to lead the entire NCAA in assists per game and averaged 24.5 points per game in his sophomore season at Murray State. The first NCAA player to ever average at least 20 points and 10 assists

per game in a single season. Steph Curry has paved the way for smaller guards and I think Ja’s game reminds me a lot of that skinny kid I watched demolish the Mocs at McKenzie Arena in January of 2009. As student, that game made me salty but it would become my most memorable sporting event while attending UTC. Morant and Jackson are both 19 years old and I don’t think Grind City could be any more pumped about their Grizzlies. I’m begging Memphis fans to be patient with this team, because there are going to be rough days leading up to this regime’s excellence. I think their ceiling for next season is be on the bubble for playoffs. However, if they do this rebuild right… they could be ready to take control of the Western Conference by the time Curry is 35 and the Warriors are average enough to be overtaken. Your Memphis Grizzlies could be a playoff contender for a decade straight starting in 2021. If that doesn’t make the hair on your arm stand up, you may want to check your pulse. Keep Grindin’ Grizz fans!

View all posts by Kurt McKibben

One thought on “The Memphis Blues: A Blueprint For Rebuild – Part II”